When designed well and implemented appropriately, health information technology (IT) has the potential to improve the delivery of care. Most current health IT systems, however, are plagued with poor usability and introduce new patient safety hazards that limit health IT from realizing its full potential. To reach this potential, the technology must be deliberately designed, developed, and implemented with a focus on usability and safe use. This requires vendors to employ a rigorous, user-centered design (UCD) process when developing their product and a well-informed implementation process between the vendor and the adopting organization.

To analyze the event reports, the project team will use an innovative hybrid approach of manual patient safety event review and algorithm-based natural language processing to determine which safety events involve a health IT contributing factor. The team will then determine whether a specific stage of the design or implementation process could have prevented the safety event. UCD and implementation guidelines will be developed based on the identified safety gaps as well as current practices. This evidence-based approach to developing design and implementation guidelines will better serve vendors and providers and will inform policy to improve usability and safety.

The specific aims of the project are as follows: 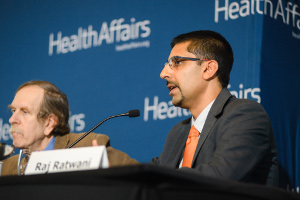 Dr. Raj Ratwani and his research team identified pervasive problems with EHR systems that regularly lead to patient safety errors and other issues, regardless of vendor. “If we don’t focus on EHR technology design,” Dr. Ratwani stresses, “it will harm patients.” This issue is particularly true for pediatric patients, who are more vulnerable to EHR usability and safety challenges because of different physical characteristics and developmental issues. For example, lower body weight and less developed immune systems make children less able to tolerate even small errors in medication dosing.

“Poor interface design and poor technology implementations can lead to errors that may result in patient harm, and that is unacceptable and completely fixable.”
- Dr. Raj Ratwani

Dr. Ratwani and team explored how EHR usability can adversely affect safety among pediatric patients, using data from three large academic healthcare institutions. Supported by AHRQ Health IT funding, the team developed algorithms that used NLP to recognize statistical patterns in words used in patient safety reports. This NLP algorithm can identify and code a reported safety event as related or not related to an EHR issue. They found that over a 5-year period, more than one-third of the 9,000 medication-related patient safety reports in the study were related to EHR usability issues, and nearly 20 percent of those may have harmed patients.1 System feedback and visual display problems were the most frequent usability issues, and they most often led to improper medication dosing, putting children at risk. In one case, the EHR did not alert a physician who ordered five times the recommended dosage of a medication for a child, which could be lethal for a child.

Improving EHR design and usability will reduce errors that can lead to patient harm.

In response, Dr. Ratwani says that tools designed to assess functionality of CDS and other EHR functionality can help increase the safety of EHR systems, which will reduce errors that can lead to patient harm. Supporting more stringent policy actions is needed, such as prioritizing safety in regulating EHRs used in documenting the care of children and ensuring that data on system-related harms is collected. An end goal of his work is to establish clear guidelines for both EHR vendors and healthcare provider organizations that will lead to usability improvements and avoid harm to patients.