The findings and conclusions in this document are those of the author(s), who are responsible for its content, and do not necessarily represent the views of AHRQ. No statement in this report should be construed as an official position of AHRQ or of the U.S. Department of Health and Human Services. (Persons using assistive technology may not be able to fully access information in this report. For assistance, please contact Corey Mackison)
Close

Childhood obesity is a serious clinical and public health issue in the United States, with disproportionately high rates among low-income minority children. This complex epidemic is attributed to various dietary behaviors, such as decreased fruit and vegetable consumption, and increased sugary drink and energy-dense snack consumption. Food preferences established in childhood often continue into adulthood; therefore, it is important to intervene at this critical period. Technology-based interventions focused on dietary behavior change can allow users to engage with culturally-relevant and tailored health information on their own time, at their own pace, and in their preferred environment.

The research team designed and developed a narrative-based, interactive, mobile-enabled dietary self-management intervention with the goal of reducing risk of childhood obesity in Black/African American, and Latino children. The tool, named Intervention INC, consists of a six-chapter interactive nutrition comic for children that includes a goal-setting and self-assessment feature, and weekly text, email messages, and reminders.

The specific aims of the research were as follows:

To inform the development of Intervention INC, children and parents participated in focus groups and interviews about dietary behaviors, technology use, and the use of comic narratives to highlight nutrition concepts. They were involved in design activities to create prototypes that underwent usability testing. The child-parent dyads also participated in a pilot single-blind randomized study of the tool, with a 6-week intervention and 3-month followup. The experimental group received the Intervention INC web-based comic with health messages primarily promoting either fruit and vegetables or water consumption. In the comparison group, children and parents received web-based newsletters with health information similarly promoting primarily either food and vegetable or water consumption. Parents in the intervention group also received the web-based health newsletters.

Preliminary results demonstrated the usability, feasibility, and acceptability of the tool. Children who read the comic consumed significantly greater amounts of vegetables and water, and less sugar. In addition, self-efficacy toward fruits, vegetables, and water as well as attitudes toward vegetables improved. The research team will investigate the possibility of conducting a full-scale randomized controlled trial to test the tool’s effectiveness. Dissemination, implementation, and integration of the tool into a community-based healthcare system will be explored in future studies. The tool has the potential for broad reach, since if it is found to be effective, it could be publicly available online and integrated into various settings such as clinics, schools, and community-based organizations. 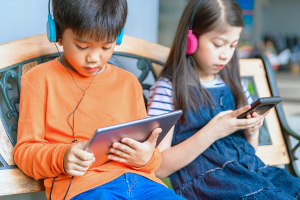 Childhood obesity has significant short- and long-term health consequences. Obese children have higher rates of cardiovascular disease and diabetes in childhood, as well as an increase in morbidity and mortality in adulthood. Often associated with the consumption of sugary beverages and energy dense or low fiber foods, childhood obesity rates in the United States are highest in low-income and minority children. Dr. May May Leung wanted to address this issue using an original and culturally relevant digital health platform.

Children live in a media-saturated environment. Innovative interventions are needed to engage children and interest them in health- promoting behaviors.

In this pilot study, Dr. Leung’s multidisciplinary research team at Hunter College-City University of New York developed Intervention INC, an interactive web-based comic that addresses behaviors associated with obesity in children aged 9-12 years. By using the individual, social, and environmental factors that affect the dietary choices of urban minority youth and the feeding practices of their parents, Dr. Leung tailored the six-chapter comic to reflect the unique cultural characteristics of the study population. Recognizing that sedentary behaviors such as using computers, tablets, and smartphones also contribute to childhood obesity rates, Dr. Leung exposed participants to a single chapter of the comic each week and designed each chapter to be read in 15-20 minutes.

The research team found that Intervention INC was highly acceptable among children and their parents, but more importantly, preliminary results show that participants who read the comic demonstrated significantly greater improvements in vegetable, water, and sugar intake; improved attitudes toward vegetable consumption; and showed greater self-efficacy toward fruits, vegetables, and water. Dr. Leung would like to see additional large-scale studies for the comic in real-world settings and adaptation of the tool to other ethnic groups.